Java Developers have one of the largest worldwide communities and are preferred for excellent documentation by fresher and working professionals. Since 2000, Java has never failed to bring amazing development and great opportunities for both organizations and students.

What are Java and its features?

Android runs the majority of today’s phones and smart devices, and Android development is impossible without Java. J2ME, a cross-platform framework for developing mobile apps for Java-enabled smartphones and feature phones, is a component of the Java programming language. Java classes are converted to bytecode by the Java compiler, then executed by the Dalvik Virtual Machine (DVM) and Android-specific virtual machine (VM).

Java is one of the easiest tools to use for the development of any desktop program. Frameworks like Swing, Java FX and Abstract Windowing assist Java to develop engaging GUIs. On the other hand, AWT has a variety of pre-assembled components such as menus, lists, and buttons. Swing is a graphical user interface widget toolkit that includes advanced features such as scroll pane, trees, panels, and lists.

Developers of software see Java as the primary weapon when it comes to scientific coding computations and mathematical procedures. Also, the programs developed with Java are extremely safe and quick. The most well-known application, MATLAB ( Mathematical Laboratory), also uses Java to power both the front end (interactive user interface) as well as the back end (a core part of the system) development.

Cloud computing refers to the on-demand delivery of IT resources, such as storage, servers, databases, networking, and software, through the Internet with a remuneration pricing model. Java today is employed for the development of most SAAS, PAAS and LAAS applications.

Java has proven to be one of the most effective platforms for creating 2-D games. Almost everyone nowadays owns an Android phone with Android games installed, and Java is required to develop Android games. The open-source most capable 3D Engine, the jMonkeyEngine, supports Java and offers unrivalled capacity when it comes to building 3D games. However, garbage collection cycles could create noticeable pauses during games; eventually, that will be resolved in future JVM versions.

If you want to work as a Java developer, you must dedicate yourself to professional development and acquiring relevant skills that meet the job description. Being a certified Java developer is the cherry on top. If you’re applying for a career as a website or application developer, is it enough to merely demonstrate that you have the skills, or do you also need to be a known expert by adding more.

Certification in Java can help you perform certain roles and responsibilities like:

Requirement: A bachelor’s degree in computer science, engineering, or a related subject is required.

Salary structure: A java developer’s average annual income for a fresher is $293,272.

opportunities and higher pay. As you already have some prior skills along with an introduction to Java development experience, they get many job opportunities like senior java developer and product manager, etc.

Requirements: Knowledge of Java Application Frameworks is essential (Struts, Spring, Hibernate, Spring Boot); working experience in an Agile context is a plus.

Salary Structure: The average annual salary for a java developer with experience is $1,396,371.

Do you have a tech-based business plan? Do you have a wish to create your own business? It is easier to attain if you have java abilities. 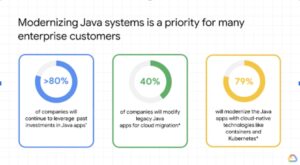 Businesses create more revenue with a shorter turnaround time by creating feature-rich and smart mobile applications. Small and medium-sized businesses (SMEs) are utilizing Java to create non-enterprise custom software with similar capabilities but superior quality and security. Learning Java will help you develop your own product and hire a good professional for your startup.

By 2024, the global development community is predicted to grow by 28.7 million people. In addition, 63.1 percent of programmers said they would continue to code in Java. The Java programming language is used to create the Android operating system, which runs on most smartphones worldwide. Java is the language of choice for online applications in many enterprise organizations due to its durability, ease of use, cross-platform capabilities, and security. Strategic planners are especially impressed by Java’s flexibility to adapt to new use cases. These are some of the reasons why Java will not be phased out in the future, and you should not doubt your thoughts about learning Java now.